Why You Shouldn’t Update WordPress, Themes, and Plugins Right Away

I wanted to write this post for some time now, and with the release of WordPress 4.9, I decided to finally do it, since I knew the support forum will get flooded again with issues after the update.

Why shouldn’t you perform updates right way? Well, for example, after every WordPress update, especially major ones, you’ll see something like this (these are just a few): 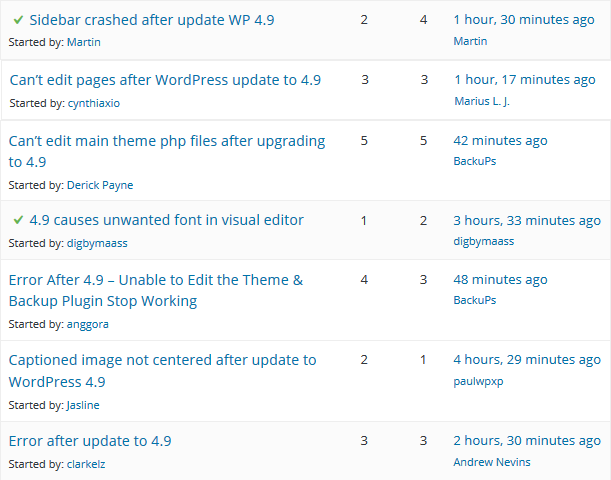 The support forum gets flooded with issues that appear after the update because most people create which seems to be a logical connection: WordPress made an update -> my site stopped working properly -> it’s WordPress’ fault.

Well, no, it’s not really like that. In the vast majority of cases, there’s no problem with WordPress, with the actual update itself. I’ve rarely seen bugs in a WordPress update which could affect so many sites in so many ways.

Why are these issues appearing after updates?

You have to keep in mind that you’re not only using WordPress alone for your website. WordPress is just the CMS platform, a quite small part of your website.

You’re also using a theme, which is created by different developers, and plugins, which are also created by other developers.

All of these being hosted on a server, which is also configured and maintained by other developers.

Now, all these separate pieces (WordPress + theme + plugins + web host) have to work together, and most of the time they do, but sometimes something breaks, especially after updates, mainly due to conflicts between the “pieces”.

I’m not going to include web hosts further into the discussion since they are not really your responsibility, you don’t have to perform updates there, configure them yourself, and so on – except for those that self-host their websites.

Update: Here’s another example I wanted to share with you:

We recently had an issue with Shareaholic and SiteGround’s (this is an affiliate link) caching plugin, SG Optimizer. So this was a case where one plugin update caused a conflict with another plugin.

As you can see, the first fix (8.4.3) created another bug that led to another type of conflict. Fortunately, the second update (8.4.4) fixed the issue.

So, every update could contain a bug that affects the software itself or could cause a conflict with another software.

How to prevent these issues

You can prevent these issues, at least most of them, by simply waiting a bit.

Whenever an update is available, just wait, like, one or even two weeks (some devs take their time). In that time, most of the bugs and conflicts (if any, of course) are found by the devs or reported by others, and they get fixed.

So by the time you update, if there was a bug, you most likely won’t have a problem, since it was already fixed.

Take my above-mentioned issue as an example; the conflict between Shareaholic and SG Optimizer. We rarely experience issues with bugs and conflicts nowadays, because we learned our lesson, and now we wait, but in the above case, I broke my own rule and didn’t wait.

I said: “Oh, it’s Shareaholic, it never caused problems with updates, don’t think it will now, I’ll just update it!”. And boom! Next thing you know, I was writing a ticket to the support, so they can get it fixed, which they did, as you noticed.

So, the ones that waited, unlike me, when they updated Shareaholic, the problem was already fixed – no issues for them.

I guess, in a way, people that update right away and experience issues, then report them, kind of save the day for the people that wait a bit before updating :).

Another important thing to keep in mind is that themes and plugins are made around the WordPress platform, which makes a WordPress update a bit more “dangerous” because your theme and several plugins might require an update in order to be compatible with the new WordPress version, and not break something on your website.

Therefore, it’s imperative to wait and see if the theme and plugins release updates as well, and in most cases, they do shortly after.

But not all developers are so quick or active, unfortunately, and some could release a compatibility update after a week or even two…

Of course, sometimes, a conflict might have your name on it, meaning it never happened anywhere else. In that case, it doesn’t matter how much you wait, because when you update, it will happen for sure. Some things are inevitable.

What about security updates?

If there are any updates regarding security, then yes, you should update right away.

Although most security related updates don’t tend to cause issues often, some websites still get affected.

So, as a precaution, you could check the changelog to see what type of security breaches were there in the first place. If there was a security breach that could have been exploited by an author from the back-end, but you don’t have authors, you’re the only author and admin, then you can wait and don’t update so fast.

If you don’t understand the security issue quite well, and can’t tell if it might affect you or not, then just go ahead and update. Better safe than sorry!

In order to check the details / changelog of a plugin update, to see what was changed / enhanced / fixed, just click on the View version X.X details when an update is available.

To see the changelog of a WordPress update, go to Dashboard -> Updates, and click on the version link.

The changelog location for Premium themes differs, so I can’t guide you there.

So, to sum it up, you should always wait a bit before updating in order for potential bugs and conflicts to get fixed, thus preventing your website from breaking.