How to Add a Caption to Images in WordPress

This post was last updated on 12/29/2018 to add guidance for the Gutenberg editor.

A caption is a small piece of text that you usually see below images.

Captions are useful if you want to provide more details about the images that you add. Here’s an example:

The view from my hotel room in Costa Rica

“The view from my hotel room in Costa Rica” is the caption that I added to the image.

That’s not my actual photo, and I don’t know if that’s in Costa Rica or not :D .

The way it displays depends from theme to theme, because some developers might customize it a bit.

WordPress has a built-in feature that allows you to add captions to images, so you won’t need a plugin, fortunately.

It’s also a very simple thing to do, which I’ll show you in this post.

Add a caption to images in WordPress

To add a caption to an image in WordPress, you’ll need to upload the image first, of course.

You can do that by clicking the Add Media button while working on a post or page, or you can go to Media -> Add New, on the left side of your Dashboard.

After the image finished uploading, on the right side, under Attachment Details, you can add your Caption. 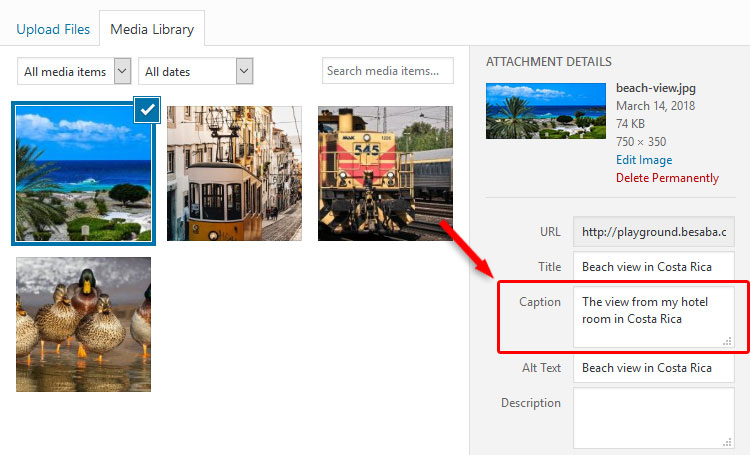 The caption will appear as you saw in the example I provided at the beginning of the post.

I recommend adding a “Title” and “Alt Text” as well.

You can also add captions when adding multiple images, like a gallery.

Adding a caption to images in the new Gutenberg editor is simpler.

You just write it beneath the image after you upload it.

Adding a caption to featured images in WordPress

I recently saw this question on Reddit. Someone was asking why can’t he add a caption to his post’s featured image.

Featured images have a different status, so to say, than normal images you add inside a post.

Captions on featured images won’t appear unless the theme developers add a special feature for that, which is quite rare.

If you want that feature, you can kindly ask the developers to help you with some customization – if it’s not too complex and doesn’t go beyond what they usually offer through support – or you can use a plugin called FSM Custom Featured Image Caption.

If you want to start your own WordPress blog, or need a website for your business, our WordPress installation service is at your disposal!